Neuroscience software survey: What is popular, what has problems?

There is an excellent survey on Neuroscience software, carried out by Yaroslav Halchenko and his colleague. Here is the result link: http://neuro.debian.net/survey/2011/results.html
The primary analyses have been published in: Hanke, M. & Halchenko, Y. O. (2011). Neuroscience runs on GNU/Linux. Frontiers in Neuroinformatics, 5:8.

I picked several figures from their result according to my research interests: 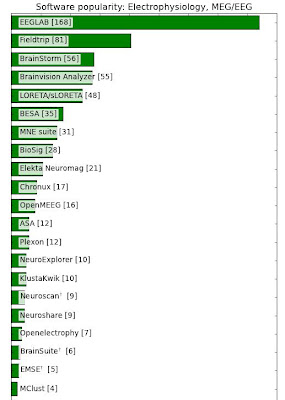 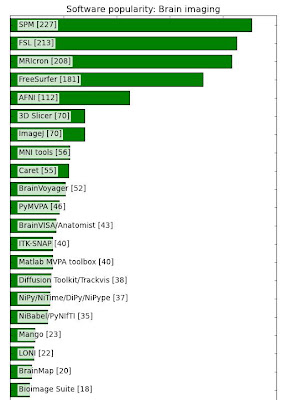 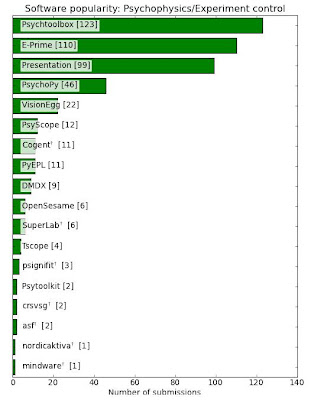 Posted by Zhilin Zhang at 10:51 AM 3 comments: Links to this post

Previously, in my homepage I only provided the content file of the toolbox, and I promised that once I translated the code descriptions into English, I would release it. However, since 2009 when I switched my interest to sparse signal recovery/compressed sensing, I had no time to do the translation job. So I decide to release it now and I apologize for some codes with descriptions/comments written in Chinese. However, if some body has questions, feel free to contact me.

The toolbox can be found in my software page: http://dsp.ucsd.edu/~zhilin/Software.html

PS: Please note that there may be several algorithm codes written by other people. The authors' names are written in the code descriptions.
Posted by Zhilin Zhang at 10:24 PM No comments: Links to this post

You can call me "Zorro" instead of "Zhilin" if you like

During my study in US, I find many people don't know how to pronounce my first name "Zhilin", or have difficulty to remember my name. So I decide to give myself a nickname such that people can easily remember or pronounce it. And I choose "Zorro" as my nickname, since I very like Zorro during my childhood and my wife said that I have several obvious characteristics in common with Zorro (except that I don't know how to fight :) ).
Posted by Zhilin Zhang at 10:02 PM No comments: Links to this post

Mike Jordan wrote a report on his interesting survey on 50 statisticians by asking them what are the open problems in Bayesian statistics. Here is his report:  http://members.bayesian.org/sites/default/files/fm/bulletins/1103.pdf

The top open problems in his report are as follows:

No.1. Model selection and hypothesis testing.

No.2. Computation and statistics.

Andew Gelman made excellent comments on these problems. Here is the link: http://statisticsforum.wordpress.com/2011/04/28/what-are-the-open-problems-in-bayesian-statistics/
Posted by Zhilin Zhang at 1:50 PM 2 comments: Links to this post

Alex has wrote a blog entry on the speed issue of LDA and released his fast LDA algorithm that performs on many computers. Here is the blog entry: http://blog.smola.org/post/6359713161/speeding-up-latent-dirichlet-allocation

In Purdue's MLSS 2011, I was lucky to attend his lectures on graphical models. I like his lectures. The only regret is that I really hope he could give more details on LDA and its variants; for example, giving a detailed development on a variant of LDA models. But I understand the time was limited. After all, the lectures serve for a seminar, not for a college class. 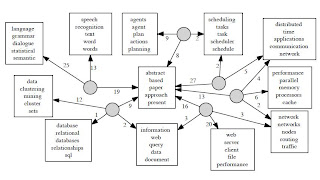 Scientific American: How Simple Photos Could Be Used as a Test for a Conscious Machine

The latest issue of Scientific American has an article: How Simple Photos Could Be Used as a Test for a Conscious Machine by  Christof Koch and Giulio Tononi (you need to access the issue to see the full-text. The website just provides you an introduction to the article). It is very interesting. If I have time this summer, I will attend the competition. In fact, I have several ideas to cheat their smart computer. But I don't want to say much right now. However, I'd to say, the picture that the authors provide (see below) is easily recognized by computer algorithms as a unreasonable picture. Their algorithm just needs to do object recognization and then do some semantic reasoning, then it can know this picture is not reasonable. So, don't be misled by the authors' picture. 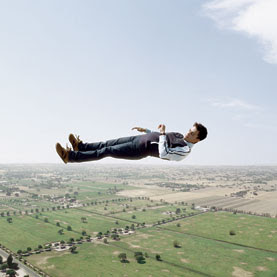 (The picture's credit to Scientific American)
Posted by Zhilin Zhang at 10:37 PM 6 comments: Links to this post

Email ThisBlogThis!Share to TwitterShare to FacebookShare to Pinterest
Labels: Neuroscience

The T-SBL/T-MSBL paper has been revised

I just uploaded the revised version of the paper "Sparse Signal Recovery with Temporally Correlated Source Vectors Using Sparse Bayesian Learning" accepted by IEEE Journal of Selected Topics in Signal Processing. Several errors in the local analysis have been corrected. This is the final version of the paper.
Posted by Zhilin Zhang at 3:03 PM No comments: Links to this post

I realized that I've almost forgot to continue this topic. Well, let's continue now. Particularly, I want to put more words on the regularization parameter lambda.

In the first blog entry of this topic (see Misunderstandings on Sparse Bayesian Learning (SBL) for Compressed Sensing (1)), I emphasized that

Now I'll talk somethings on the lambda learning rules. Generally, most SBL algorithms have their own learning rules for lambda. However, as I emphasized previously, these learning rules basically cannot lead to the best performance for their associated SBL algorithms. To give a clear understanding on this, I'll show you a simulation result below. 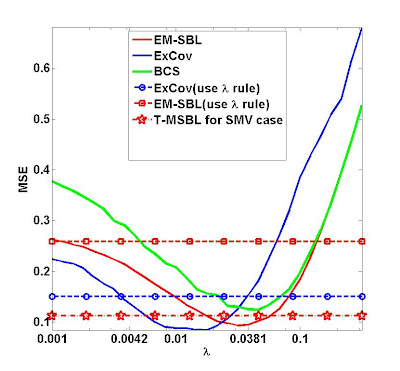 When I read papers in the past one year, I did find that some people heavily relied on the lambda learning rules of SBL. An obvious example is, in terms of recovery performance, SBL algorithms are much better than Lasso, Basis Pursuit, Matching Pursuit etc (this is basically a "truth" well known in our lab). However, in some published simulation results, we found SBL had poorer performance than those algorithms. This is probably due to wrong choices of lambda values, or the use of some lambda learning rules that behaved very poorly. 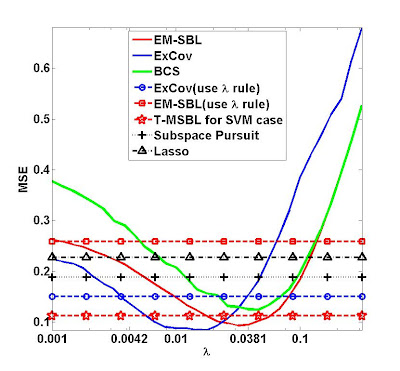 Actually, lambda learning rules are more important for SBL algorithms in practical applications. This is because in practice, you cannot obtain the optimal lambda value. Although you can use cross-validation, modified L-curve methods or other methods to choose a value for the lambda, for a large-scale dataset, the computational load is heavy.

In the next blog entry, I will discuss the issue on the threshold to prune out small gamma_i.

For reproducibility, the experiment settings are as follows:

Posted by Zhilin Zhang at 6:19 PM 2 comments: Links to this post

Zhilin Zhang
I am the founder and CEO of Data Legend Capital Management. The company developed artificial intelligence and Big Data-based stock investment/trading system for our clients. So far, the asset under management is over 5 millions. Previously, I was a research manager in Samsung Research America -- Dallas. I graduated from University of California, San Diego (UCSD). More information can be found at my homepage: https://sites.google.com/site/researchbyzhang/.